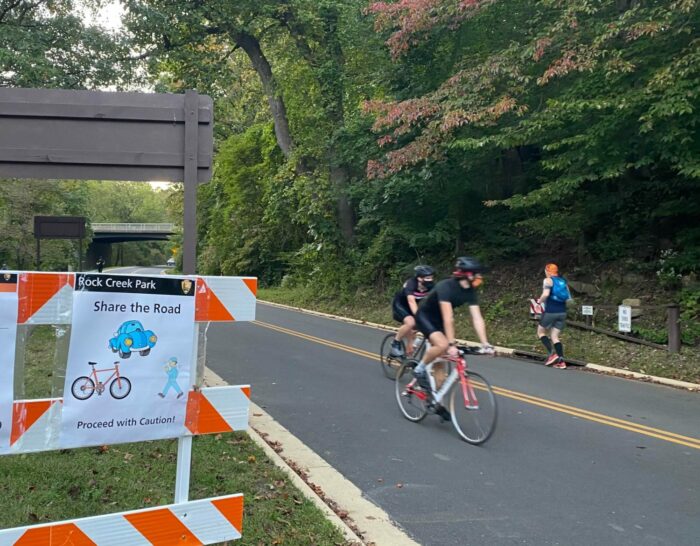 Submitted to the National Park Service on August 11, 2022

These comments are submitted on behalf of the Capital Trails Coalition to express our concerns regarding the National Park Service’s proposed decision to reopen upper Beach Drive in Rock Creek Park to vehicular traffic during the majority of the year.

The Capital Trails Coalition (CTC) is a collaboration of over 70 public and private organizations, agencies, and volunteer advocates, across six regional jurisdictions, working to complete an 990-mile interconnected network of multi-use trails in the national capital metropolitan area. The National Park Service, one of the founding partners of the CTC along with the Washington Area Bicyclist Association and Rails-to-Trails Conservancy, has been instrumental in the significant progress made in recent years building out and improving trails throughout the region. The 2016 Paved Trails Study, published by the National Park Service’s National Capital Region, remains one of the CTC’s foundational master planning documents.

That study set “a vision that will guide future planning and coordination for trails in the NPS National Capital Region Paved trail network,” and “identifies achievable goals, provides 121 capital and programmatic recommendations and prioritizes opportunities to expand multi-use trails in D.C. area national parks.” Goal 1 – create a widespread, equitable and interconnected regional paved trail system while conserving, protecting and promoting natural and historic resources – is nearly the same language adopted by the Capital Trails Coalition and by formal resolutions in constituent jurisdictions.

We strongly believe that the decision to reopen upper Beach Drive to vehicular traffic for 9 months out of the year runs entirely counter to the Park Service’s stated vision for trail development in the region.

The study makes clear that Rock Creek Park is a priority corridor: “Providing a safe and viable off-road north-south trail connection through Rock Creek Park is a key objective of this plan.” The study also recognizes the challenges of building a new paved trail through this region, mentioning the sensitive environmental and cultural resources, and the lack of safety for people who walk and bike sharing Beach Drive with cars. Despite the challenges, the need is such that the study recommended exploring the feasibility of a trail alongside Oregon Avenue – as certain in 2016 as now to be an expensive undertaking – to address this major gap in the overall regional trail network.

Fast forward to 2020 and we saw the National Park Service presented with a compelling opportunity – to close upper Beach Drive to cars, thus filling in the missing north-south trail network gap at no cost. At the time the Trails Study was written, the authors could not have thought that complete closure to cars would ever be considered an option, but the last two years with this policy in place have shown that this is not just possible, but has proven to be highly successful and popular. Maintaining the closed-to-cars policy of the last two years on Upper Beach Drive would thus solve one of the most challenging and important issues identified in the Paved Trails Study, and do it in a way that requires no additional spending, and causes no additional environmental impact.

To back-slide on this critical piece of the regional trail network, against the wishes of local elected officials and the public, would be an unprecedented reversal of the system-wide progress that has been accomplished during the last 6 years, much of which can be credited to the leadership of the National Park Service, on its own and as part of the Capital Trails Coalition. The Paved Trails Study, and the subsequent work with the CTC, has shown that NPS can be more than just a collection of autonomous parks, operating in their own silos, ignoring what is taking place in the larger regional world of transportation policy and quality-of-life improvements. The Transportation Planning Board saw NPS’s leadership in building a regional network of trails, which was a factor in the TPB adopting a new and comprehensive regional trail network and advocating for its completion as one of its key goals, with support from all of the local political jurisdictions.

Reopening upper Beach Drive also undercuts projects throughout the park. The expensive, spectacular, and nearly-complete Rock Creek Park Trail rehabilitation project was based on needs identified in the previous two decades, including the importance of separating car traffic on Beach Drive from bikes and pedestrians. This mammoth slate of trail improvements south of Broad Branch Road perfectly complements a continued closure of upper Beach Drive as noted by NPS staff, enabling users to safely traverse from the Potomac River all the way to the DC/Maryland border (and continue another 15 miles on the paved Rock Creek Park Trail in Montgomery County, MD). The future Military Road Trail would also be significantly impacted; we made clear in our written comments that our support of the complicated double crossing of Joyce Road at Beach Drive and again near Missouri Avenue was contingent on low traffic volumes, which would be dependent on the continued closure of upper Beach Drive.

To open upper Beach Drive to car traffic once again would reinstate the significant gap in what NPS itself identifies as a high volume trail corridor and corridor of regional significance. The insurmountable and inevitable safety conflict between cars and bikes on Beach Drive would require NPS to go back to the drawing board to meet its stated goals of trail connectivity, except that the one previously-suggested solution of a trail along Oregon Avenue is almost certainly nonviable given the following:

But it need not come to this. NPS has the answer to regional trail connectivity, an answer that has widespread support from the public (6 to 1 comments in support of continued closure) and public officials (not a single elected official has come out against continued closure). Three months out of the year is simply not enough – not for the public and not for the Park Service’s objective of regional trail connectivity.

Removing a solution that has already been proven to work is simply indefensible. It would call into question the commitment of NPS to meeting all of the other goals that are listed in your Paved Trails Study, and weaken some of the bonds that have been forged with local elected officials and the TPB. It would require significant future expenditures, far in excess of any mitigation measures that might be required to deal with the social trails NPS has focused on in the EA process. And it would unnecessarily result in more conflicts between cars and people on foot and bike, with all-too-predictable outcomes.

We therefore implore the National Park Service to reconsider its decision to reopen upper Beach Drive to vehicular traffic.