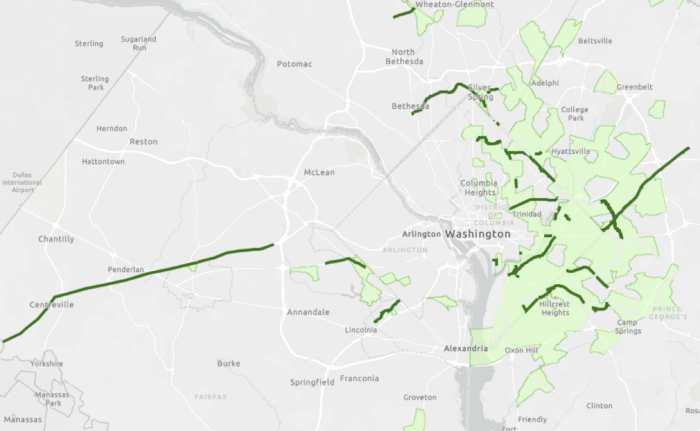 From the outset, the Capital Trails Coalition recognized the deep inequities in our urban and suburban environment and their roots in generations of unjust structural barriers, policies, practices, attitudes, language and cultural messages. Our unequal transportation system – from the path of highways to the density of public transit options to, the distribution of trails and green spaces – is an ever-present reminder of the injustices of the past that continues to poison and disproportionately impact communities of color today.

With this firmly in mind, the CTC resolved to center equity in its work, promoting a trails network that analyzed, acknowledged, and addressed the unique challenges and circumstances of impacting specific communities’ mobility, safety, and connectivity needs. We would not simply advocate for projects with the most vocal supporters – primarily in whiter, wealthier neighborhoods – or for projects easiest to build.

Instead, we would advocate for projects that would be most impactful to underserved communities and most effectively connect existing infrastructure to expand the utility of the overall network – to allow more people to get to more places safely and conveniently. Our criteria was fourfold. We sought trail projects that touched or transited areas with:

Activity Centers, per MWCOG, are the existing urban centers, traditional towns, transit hubs, and areas that regional planners anticipate to see high-density development and growth1. Layering each criteria on top of one another, we created a priority zone which contained 22 projects, our Planned Trail Analysis Priorities (pictured in the map at the top of this post).

At the same time, the CTC also asked each of its jurisdictional partners (Fairfax County, Arlington County, Montgomery County, the District of Columbia, Prince George’s County, and the City of Alexandria) to identify their priority projects. That process generated a list of 29 projects, our Stated Jurisdictional Priorities. A total of 11 trail projects were identified by both prioritization processes, giving us a grand total of 40 priority projects. From there, we went to work.

Since releasing the list of 40 priority trail projects across the Capital region in 2018, the CTC has tirelessly advocated for their funding and completion. So far we have celebrated the opening of the Little Paint Branch Trail Trail and the Washington Boulevard Trail Phase II. We’ve seen improvements made to Memorial Circle, and plan to celebrate the opening of the Metropolitan Branch Trail from Brookland to Fort Totten in March 2022!

Our methodology, while intentional, is not without shortcomings. Of specific note, we only analyzed and included trail projects delineated in each jurisdictions’ Bike/Trail Master Plan. The methodologies used to develop and select projects within each Master Plan differed and involved varying levels of community engagement, and we were not in a position to assess or advocate for those processes. Should all 40 priority projects and all 400+ miles of existing planned trails in the Capital Trails Network be completed tomorrow, there would undoubtedly be gaps and access limitations for our priority constituencies.

In retrospect and moving forward, we recognize the importance of ensuring broad and meaningful engagement at the earliest stages of project development. A recent example we commend and look to replicate: in 2021 Fairfax County, in line with its One Fairfax Policy, hosted 12 virtual community conversations and incorporated feedback from hundreds of survey respondents to develop its near-final ActiveFairfax Transportation Plan.

We also recognize that we have employed a largely ‘grasstops’ approach to advocacy and have not, as a coalition, engaged enough with the communities we aim to do right by (though many of our member agencies and organizations have, and we continue to do outreach to community groups across the region).

We know there are opportunities to do better, to be more intentional, and to center equity more firmly in all phases of project development, implementation, and maintenance. To that end, the Coalition is currently undergoing a strategic planning process where we are working with our members to reevaluate this process and remain true to our equitable trail development statement.