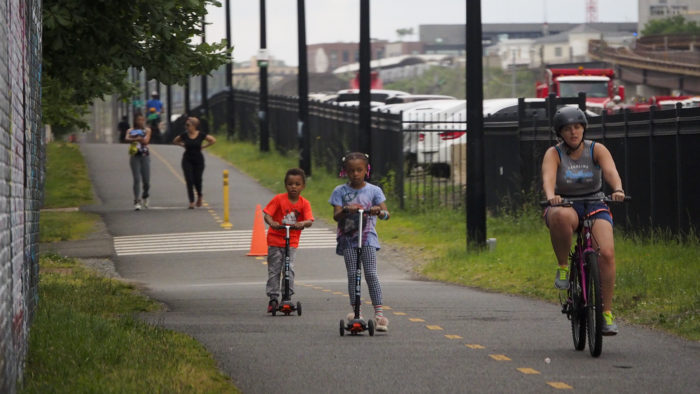 It’s been a long winter, and so much has happened since our October newsletter! From Congress passing the Infrastructure Investment and Jobs Act in November to the official opening of Malcolm X Trail, there’s been a lot to celebrate. Here at the CTC we hired a new Trails Coalition Coordinator (meet Kevin!) and honored three Trail Champions who are helping to make our region’s trails more accessible and connected.

Read on for more of the things we’ve been up to across the region!

Every winter the Coalition meets with our jurisdictional partners to update our interactive trail map. We make sure the trail alignments are up to date and update any trails that have gone from paper to pavement! The trail map is not static but evolves as plans are updated. We recently completed our updates for 2022. The current network is made up of 491.4 miles of existing trails and 499.3 miles of planned trails!

We’re currently working hard to support our jurisdiction’s Rebuilding American Infrastructure with Sustainability and Equity (RAISE) grant applications. The RAISE Discretionary Grant program provides a unique opportunity for the DOT to invest in transit, road, and multi-modal projects that promise to achieve national objectives. DDOT is applying for the South Capitol Street Trail,  Arlington DES is applying for the Cemetary Wall Trail, and M-NCPPC’s Prince George’s County Parks and Recreation is applying for a tri-jurisdiction package of trail projects that includes 7 multi-use trails across the region. Feel free to reach out to us for more information!

As the season gets warmer, people will be flocking to trails for exercise, recreation, and time with their friends and family! Come say hi to us at the 50th Anniversary Celebration for the Mt. Vernon Trail on Saturday, April 16th from 10:00am-1:00pm. Register here!