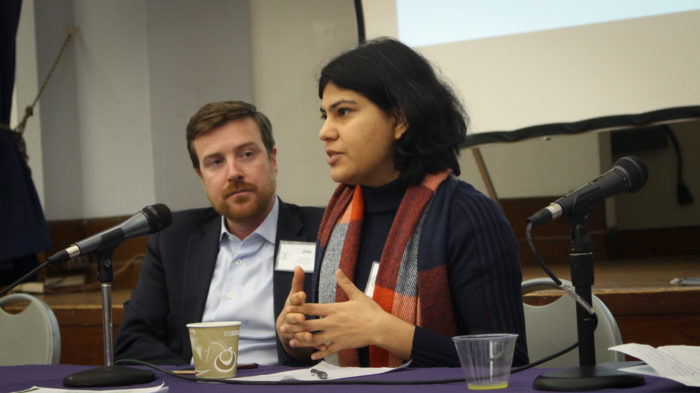 On Thursday, November 15th, we held the sixth annual Capital Trails Symposium at Trinity Washington University. And we had some exciting things to share this year. Notably, we announced the cost estimate for building the remainder of the Capital Trails Network: $1.1 billion!

Maura of @FedCityCouncil and Leah of @railstotrails announcing the cost estimate to fully buildout the @TrailsCoalition network. $1.1 billion investment to build 350 miles of trails. Estimated $500 million a year in healthcare savings. #trailsymposium pic.twitter.com/MnQcbESDm1

The number may seem large, but compared to other transportation projects in the region, the benefits from this trails investment would be far greater than a widened highway or interchange. Attendees got a deeper analysis of the cost estimate in the “Cost, Benefits, and Context” session following the morning plenary.

Before lunch, Ward 6 Councilemember Charles Allen shared remarks with Symposium attendees, expressing his support for the work the Coalition is doing and urging the Coalition to press forward.

Remarks from @CMCharlesAllen at the #TrailSymposium: “To get people to feel confident in their choice” when in comes to getting around the city, no matter the mode pic.twitter.com/YavDMpFoj2

We also gave out a handful of awards! This year’s Trail Advocate of the Year award went to Fred Shaffer from the Maryland-National Capital Park Planning Commission (M-NCPPC) and Maura Brophy from Federal City Council . We also gave out a new award: Trail Champion of the Year, which went to Jack Koczela from the DC Recreational Trails Advisory Committee, and outgoing Capital Trails Coalition Chair.

And if you happened to peruse the registration table, you hopefully grabbed a copy the new print maps! There’s one for every jurisdiction in the Capital Trails Network – take a look at them here. (Scroll to the bottom of the page.)

12 additional agencies and organizations joined the Capital Trails Coalition this year, adding to our broad membership. Three of the Coalition’s network projects have opened, two have broken ground, and over 15 have moved on to the next stage of trail development. There’s a lot of work to be proud of, and we’re looking forward to the progress we’ll make in 2020!

Find a gallery of photos from the 2019 Symposium below. Thank you to all who attended this year’s Symposium, and to our sponsors!